with the smiles
for a walk through town
winter sun

Posted by Dejan Pavlinović at 12:12 No comments:


summer nocturne . . .
amidst a sleepy meadow
a bug orchestra

Posted by Dejan Pavlinović at 12:12 No comments: 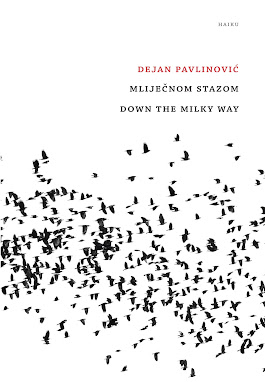 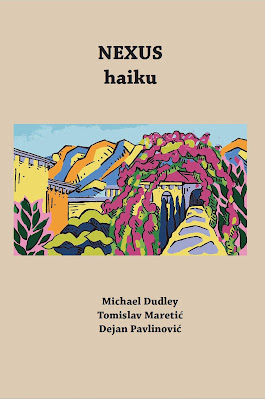 ''MLIJEČNOM STAZOM - DOWN THE MILKY WAY'' is Pavlinović's first haiku collection and it contains 100 of his haiku poems from a period of 2007-2016, including those published, awarded and commended ones on various competitions. The book is entirely bilingual (Croatian and English) since he writes and publishes in both languages. The foreword was written by the eminent American author and theorist of haiku poetry and other short Japanese forms, Jane Reichhold. The afterword was written by Djurdja Vukelic Rozic, one of the leading poets and promoters of haiku poetry in Croatia and its wider region. Respectable and awarded authors George Swede and Chen-ou Liu contributed with their short blurbs. The book received excellent reviews, among others also in notable haiku magazines, such as BLITHE SPIRIT (the official journal of the British Haiku Society), FROGPOND (the official journal of the Haiku Society of America) and the Japanese haiku magazine SENRYU TO.

''NEXUS HAIKU'' is a co-authored and co-created bilingual (English and Croatian) collection of haiku, senryu, haiku sequences and rengay. All poems were composed equally and collaboratively during a period of three years by Michael Dudley, Tomislav Maretić and Dejan Pavlinović. Working co-operatively together on the poems created an ebb-and-flow process that allowed continual opportunities for organic expressions of complementary energies; complexities of ideas; shifts of perspectives; and juxtapositions of personal and cultural experiences, perceptions, and memories. The 120 pages of the book have been enriched with Sanela Pliško's foreword and Nina Šestanović's illustrations, as well as blurbs written by Gilles Fabre and Đurđa Vukelić Rožić. The authors of NEXUS haiku are established haiku poets whose haiku poems have been awarded and commended in many Canadian, Croatian and international competitions, and have been published in numerous national and international haiku magazines, newspapers, websites and anthologies. NEXUS haiku is the winner of the 2021 Borivoj Bukva Award for best haiku collection published in Croatia, presented by the Croatian Literary Society.